MyEtherWallet, one of the most popular Ethereum wallet solutions, has recently split into two different development teams. The fork has caused a significant amount of controversy in the crypto community, and has resulted in the launch of MyCrypto.

The original MyEtherWallet platform, founded by Taylor Monahan and Kosala “Kvhnuke” Hemachandra, was launched in 2015. MyEtherWallet is a streamlined, easy to use method of navigating the Ethereum blockchain, and is used by hundreds of thousands of cryptocurrency users to store, send, and receive both Ethereum and a wide range of ERC20 tokens.

While both founders have worked closely together on the project over the last two years, a recent schism in the development team regarding the future of the project has lead Monahan to announce a new company and the MyCrypto platform on the 8th of February.

At this point in time, the MyCrypto platform is a fork of the open source MyEtherWallet platform. During a series of announcements following the launch, however, the MyCrypto development team will focus on delivering an enhanced version of the MyEtherWallet base along with desktop and mobile apps in the next few months.

A “New Beginning” for MyEtherWallet

Monahan released a lengthy statement via Medium on the day following the announcement delineating some of the reasons for the split. A condensed version of the statement is available here. In response to Monahan’s statements, Hemachandra has stated that he will continue to remain committed to MyEtherWallet:

“MyEtherWallet will continue to be online until it, for whatever reason, is not online. As we do for a number of products in this space, if we at any point determine the domain to be compromised, serving malicious code, or otherwise detrimental to the community, we will do what we can to warn the community and prevent use of that codebase and website. However, we wish the best for MyEtherWallet and hope it continues to be a viable product in this space.”

The sudden and unexpected fork has led to a significant amount of confusion in the crypto community. MyEtherWallet is a critical service for many investors, as the compatibility it offers with hardware wallets such as the Trezor or Ledger Nano S makes it an indispensable tool for keeping cryptocurrency capital safe from exchange hacks.

As MyEtherWallet is compatible with a broad spectrum of ERC20 tokens, which are created on the Ethereum blockchain, it has played a key role in the explosive development of the ICO ecosystem over the last year. The relative ease with which ERC20 tokens can be created for new initial coin offerings has made Ethereum the de facto “ICO blockchain”.

This key role has made MyEtherWallet a prime target for hackers and fraudsters in the cryptocurrency space. A recent high-profile attempt to capitalize on MyEtherWallet’s popularity was a fake iOS app, which made it all the way to #3 in the App Store finance category. As a result, there was a significant amount of concern from community members when the MyEtherWallet Twitter suddenly became MyCrypto.

In order to dispel uncertainty, Monahan took to Twitter and posted pictures to prove the project’s veracity

In order to get MyCrypto stickers, read the full statement and get to the end.

Monahan’s use of the original MyEtherWallet Twitter to communicate the project launch and its subsequent transformation into the MyCrypto Twitter, however, has drawn ire from some critics and prompted a statement from Hemachandra that suggests the takeover may have been “unlawful”

https://t.co/zD327znNCg is secure and functioning normally. Your wallets have not been compromised, and you may continue to use MEW as intended. At present, however, we are investigating what we believe to be an improper, perhaps unlawful, social media account switch

While Monahan’s intentions may have been forthright, perhaps unexpectedly switching the Twitter handle of one of the most widely-used open source Ethereum wallet services online unexpectedly and without warning was not the most efficient or professional method of handling the schism.

While Monahan didn’t explore the interpersonal reasons behind the split in any of her statements on Medium, she did provide an expansive explanation of the history of the MyEtherWallet development process.

In her post on Medium, Monahan noted that the MyEtherWallet development process had a negative impact on her mental health, sleep routine, and more.

“The value of Ethereum increased exponentially and so did the stakes. Every potential bug or help query became “the most urgent thing ever.” Every monumental task finished meant another monumental task started.”

Some of the confusion regarding the split can perhaps be explained when assessing the MyEtherWallet GitHub Contributions page over the last year: 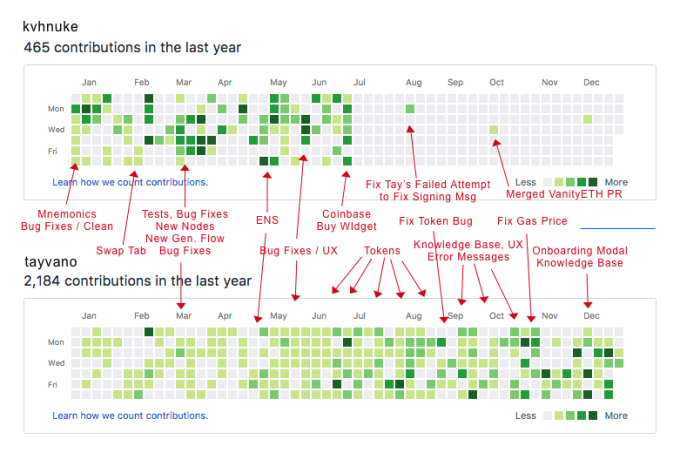 Monahan’s post noted the need for an increase in professionalism in the way MyEtherWallet is managed, stating that it’s time for the platform to change from a “fund side project to a real company fast”

“Building a product, a company, and a team is really fucking hard and requires more time and energy than you think you have. I was never prepared for the next onslaught of traffic, the different types of people starting to use our product, the phishers, the needs of the community, and the needs of our team. Exponential growth requires exponential effort”

The Future of MyCrypto

While the MyCrypto platform hasn’t announced any official VC support, Monahan’s apparent decision to operate the MyCrytpo platform in a more businesslike manner will certainly draw the interest of potential investors.

The MyCrypto team has outlined a commitment to developing a platform that delivers a “safety, control, ease-of-use, privacy, decentralization, and trustlessness”, with a focus on remaining true to MyEtherWallet’s “ open-source, privacy-minded, transparency-focused, and client-side root”.

Samuel is a freelance journalist, digital nomad, and crypto enthusiast based out of Bangkok, Thailand. As an avid observer of the rapidly evolving blockchain ecosystem he specializes in the FinTech sector, and when not writing explores the technological landscape of Southeast Asia. Follow him on Twitter: @sam_town_writes
Website: http://samuel.town
Posts created: 11

Next article Gemini Exchange Full Review – Is it Safe in 2020? 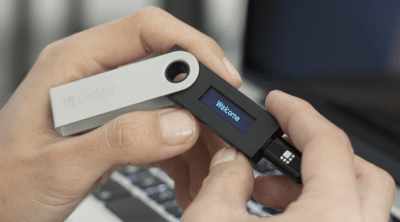 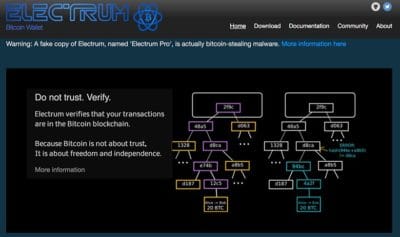 Electrum Wallet Review and Full Guide – How to Use 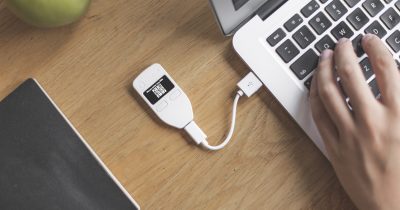 Trezor Hardware Wallet Review – How Does it Work?

March 3, 2018
There are no comments yet No comments